One of the most famous Dutch foods has to be this boerenkool recipe, also named stamppot. This Dutch stamppot recipe is easy and involves just a few ingredients: Dutch kale and potatoes. This boerenkool (boerenkool is the Dutch word for kale) stamppot is a true staple in The Netherlands during the cold autumn, winter and spring evenings. It fills you up, makes you feel warm inside and gives you a lot of energy. I hope that you will enjoy this kale stamppot.

Stamppot is a Dutch recipe and tradition, and so is this Dutch boerenkool stamppot. It is one of those recipes that have been eaten for centuries (especially after potatoes became mainstream on the European continent. Enjoy this boerenkool recipe.

Kale is a descendant of the wild cabbage, a plant that originated in Asia-minor and was brought to Europe by Celtic nomads in around 600 B.C. Around 400 B.C. a cabbage was described as a forerunner of our current kale, which was loved in Greece and later on, the Romans.

Kale has been a popular green vegetable since, at least, the Middle Ages. It is said that English colonists brought the plant to the U.S. in the 17th century. Boerenkool has been found inside old Dutch cooking books since at least 1661. At that time, regular people didn’t use potatoes as they were costly and only available to rich people, but they did already use the method of laying a sausage on top of the kale.

Boerenkoolstamppot is a dish made with potatoes and kale, with usually a sausage on top. But, if you’re vegetarian or vegan and would like to enjoy this boerenkool recipe, then you can simply skip the smoked sausage and exchange it for a vegan option. This version of boerenkool is mainly eaten within The Netherlands, and here kale is a real winter vegetable.

Boerenkool tastes extra good when the kale gets harvested from the fields after it has frozen outside. Because of the cold, the kale makes extra sugar which makes the kale taste even better. Traditionally boerenkool is eaten with gravy, sausage, shredded meat or baked bacon bits. Some people also add something sour, such as vinegar and pickles, so don’t be afraid to experiment with stamppot recipes.

1. Add the frozen kale to a big pot and add water on top of it. Kale often floats to the top when you boil it, but make sure that there is enough water in the pot so you can easily stir it around. Add salt to the pot and place it on medium-high heat. When it boils, you can take it down to medium heat, so it still boils.

2. Peel and cut the potatoes into fourths. Lay them inside a pot and add water to it. Clean the potatoes with this water and pour them off. At home, we like to have more kale in the stamppot than potatoes. If you prefer to have more potatoes, then I can suggest you use a few extra potatoes.

3. Add water to your potatoes again, add salt and place the potatoes on medium-high heat. When the potatoes start to boil, turn the heat down to medium and let it boil.

4. Add your rookworst sausage to a pot with water. If it is from the brand Unox, the water isn’t supposed to boil. This Dutch sausage needs to stay inside the plastic in the pot with water and warm slowly.

5. The Dutch kale is usually al dente after 30 minutes (it depends on the kale: for instance, really fresh kale is earlier done), but it’s done after around 45 minutes. The potatoes are usually done after approximately 20-30 minutes. Firm potatoes take longer than floury potatoes. You want to make sure that your potatoes are done, as you’re going to use them for a mash.

6. When the kale is done cooking (taste if it’s done), you pour off the liquid into a little pot, so you can use that later to make this kale potato recipe a bit moist.

7. When the potatoes are done, you pour off the liquid.

8. Now, you will add the potatoes to your kale and start the mashing. Make sure that you mix the kale and potatoes good through each other. Add some of the kale liquid, some pepper (the optional butter, baked onions and/or the vinegar) and stir it again. Then you take the hot sausage out of the package and place it on top of your finished kale stamppot.

Some people add the potatoes to a big pot and place the kale and sausage on top. However, kale usually takes way longer than potatoes before it’s done. I still want to have a bit of texture in the potatoes and not let it become baby food.

You can eat this boerenkool recipe with nicely seasoned and baked onions, siepelhachee (Dutch beef onion stew), some gravy and/or the Dutch ‘rookworst’ (a Dutch smoked sausage that cannot be found outside the country, so stock up on Unox sausages when you visit The Netherlands). Some people add baked bacon parts to the stamppot at the end, but I’m not much of a pork eater.

If you’re looking for a vegan Dutch kale stamppot recipe, then you can simply follow the instructions and replace the sausage with a vegan sausage and the gravy too. 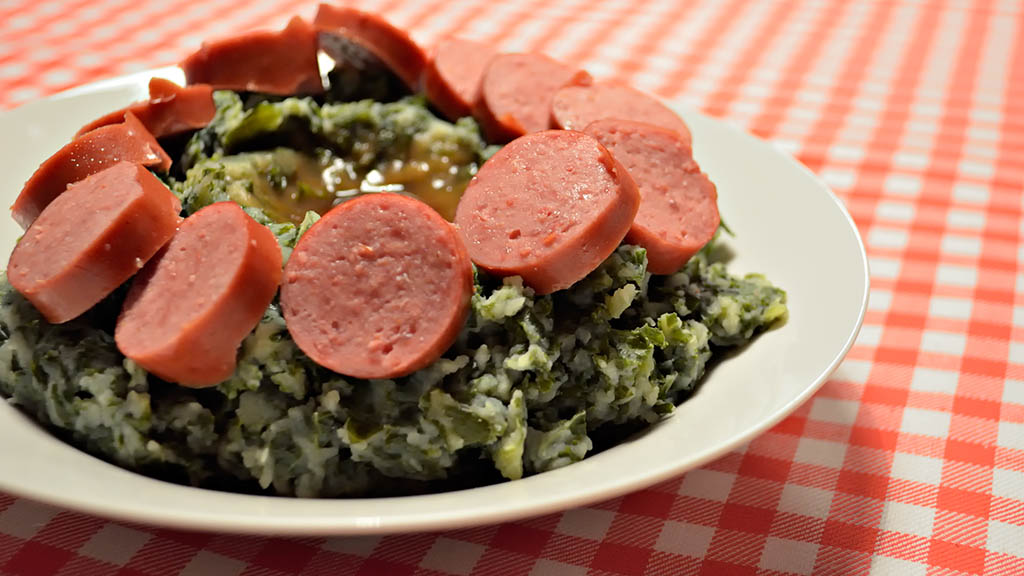 This boerenkool stamppot recipe is one of my favourite Dutch recipes for making stamppot. Some tasty (dutch) potatoes and kale, and you’ve got yourself an easy but delicious meal.

I hope you will enjoy that and this kale and sausage recipe. And again, don’t worry if you’re looking for a vegetarian stamppot recipe or vegan: You can easily eat this borecole recipe with something that replaces the sausage. 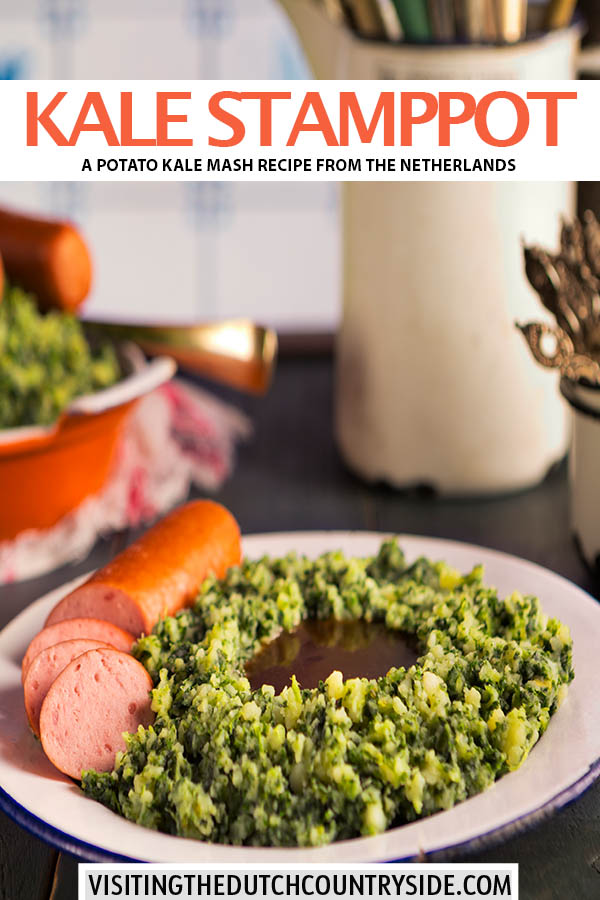