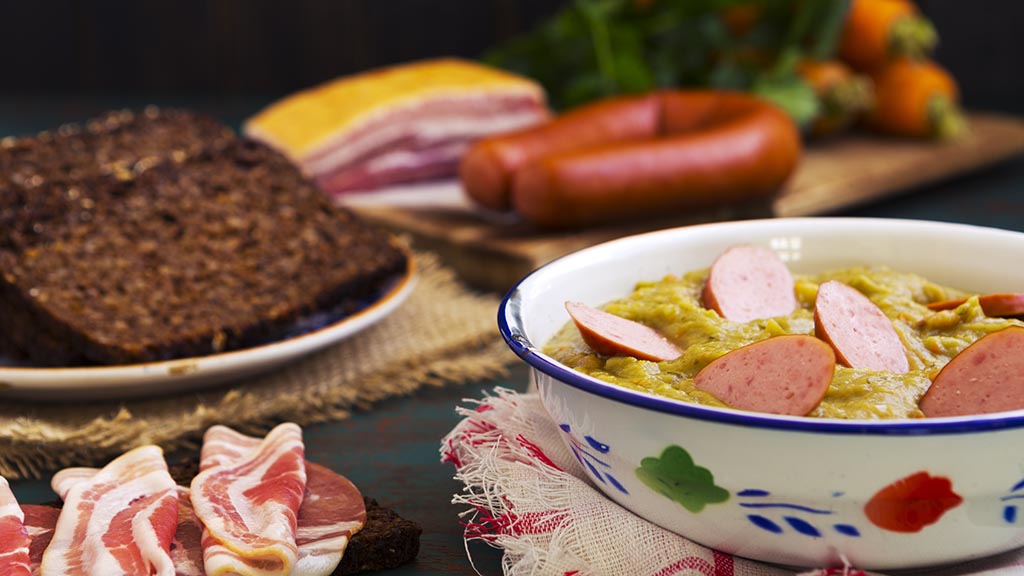 The Netherlands is famous for quite a few tasty goods, and Dutch pea soup is one of them. That’s why this erwtensoep recipe is one you must try. It’s a Dutch soup made from green and split peas and traditionally with meat. But, I have included a vegan Dutch pea soup recipe down at the bottom of this page. This version of the pea soup is as Dutch as it can be. If you’ve ever visited Dutch restaurants in The Netherlands, it will probably remind you of when you were in Amsterdam and ate split pea soup. Whatever the reason is that you’re searching for this Dutch split pea soup, it’s all completely valid, and I hope you will enjoy it. Remember to be patient with this recipe, as the meat version takes two full days of preparation and letting it rest before you can eat this snert soup.

Erwtensoep is a Dutch soup made from peas: green peas and/or split peas. Snert is the name of the version eaten during winter in The Netherlands and is very thick (more porridge-like than soup). Soup from peas has been made for centuries all over the world: From old Greece to Asia. In Northwestern and Eastern Europe, the thick versions of pea soup are popular. In other parts of the world, they are often less dense than you can find them here. The first Dutch pea soup recipe dates back to the beginning of the 16th century.

Snert, or Dutch pea soup, is made from ingredients that almost all have a relatively long storage life, such as potatoes, leeks, carrots, onions and celeriac. The base of the soup is peas and a fat piece of pig meat.

Did you know that there is a yearly championship of cooking Dutch snert in The Netherlands? The 25th edition took place in 2019 and is organised in the Groningen province. Cooking erwtensoep is also part of the immaterial heritage in The Netherlands.

I hope you will enjoy this Dutch pea soup recipe and that you will like the taste of this erwtensoep. It’s a very traditional Dutch soup, but a delicious one nonetheless.

1. Soak the green peas and split peas in 5 litre water for at least 12 hours. So, it is recommended to soak them in a big soup pot in water the night before you want to use them.

2. When it’s the next day, and the peas have been soaking for at least 12 hours, it’s time to add the washed pig’s trotters, the salt and the bay leaves to the water with the peas. You will bring this to a boil and leave it to boil for at least 1,5- 2 hours with a closed lid. Remove the foam from the top when the cooking time is finished.

3. While the pot is boiling for a few hours, you’re going to clean and cut the vegetables. Cut the leek in rings and peel the celeriac and potatoes, and cut them into cubes. Then you will cut the carrot into small pieces and will slice the sausage into small slices.

4. After the 1,5-2 hours of boiling of step 2 is finished, you will add the vegetables and pieces of sausage and boil it for another 30-45 minutes. Don’t forget to stir when you’re cooking it! After this time has passed, you will take the bay leaves and pig’s trotters out of the soup and put these on a plate next to the soup. Take foam from the top if it is needed.

5. Leave the Dutch pea soup to simmer for around 4 hours while stirring now and then. Again, remove foam from the top if it’s needed.

6. In the meantime, you will remove the skin and bones of the pig’s trotters and will cut the remaining meat into small pieces.

7. After the 4 hours of simmering are done, you will add the meat from the pig’s trotters to the soup and will cut the celery leaves roughly.

8. Add the roughly cut celery leaves to the soup, as well as freshly ground black pepper.

9. There is a possibility that the soup has thickened too much to your liking, so in that case, you can add a bit of extra water, so it’s the thickness you prefer.

10. When the thick pea soup is finished, you should not eat it immediately; it actually has to sit for an entire day to get the best flavour in the soup.

In total, it takes around 3 days to create this soup: From soaking the peas on the first day, making it on the second day and eating it on the third day. The longer you boil the erwtensoep, the tastier it gets.

You could also just use split peas or green peas. If you’re just using green peas, then the soup will be thinner as split peas thicken up the soup. In theory, split peas don’t need to soak in water, but there is a chance that the split peas won’t be done if you don’t do that. So, that’s why I say: soak the split peas.

You eat this recipe for erwtensoep with fresh Dutch rye bread with butter and ‘katenspek’, a traditional Dutch type of bacon.

This Dutch pea soup is traditionally made with sausage. However, instead of the traditional Dutch smoked sausage (rookworst), you can either add 60 grams of butter at the end, replace the sausage with bacon bits or use chorizo or any dried sausage.

You can easily freeze Dutch green pea soup, making it very easy to have a delicious meal on the days that you don’t feel like cooking. Also, erwtensoep needs to be really, really thick. But, if you prefer it too be less thick you can always add extra water.

If you’re searching for Dutch pea soup but vegetarian and vegan, then this recipe from De Groene Meisjes is perfect for you. I’ve translated it to English for you, but it’s their recipe.

1. Wash the split peas thoroughly before you’re going to cook, then under running water. In the meantime, you add 4 litres of water to a big soup pot and bring it to a boil. Then you will add the washed split peas and the bay leaves to this boiling water. Leave this boiling for at least 30 minutes without adding anything else.

2. Cut the onions, the bunch of celery leaves, peppers, carrots, celeriac and potatoes in rings and pieces. Ensure that the parts aren’t too big as we’re not mashing the soup, and if the pieces are too big, it isn’t easy to eat.

3. After the peas and bay leaves have been boiling for at least 30 minutes, you will add the vegetables to the pot, as well as crumbling the cubes of vegetable stock. Leave this boil for at least 45 minutes and check on the veggies now and then.

4. When the split peas fall apart (it takes a while, so be patient) and the vegetables are soft, that’s when you add in your block of smoked tofu (cut in small pieces). Stir it around the soup, so it’s evenly divided. Then add pepper and salt.

5. You can bake some vegan sausages and serve those in slices on top of your soup. 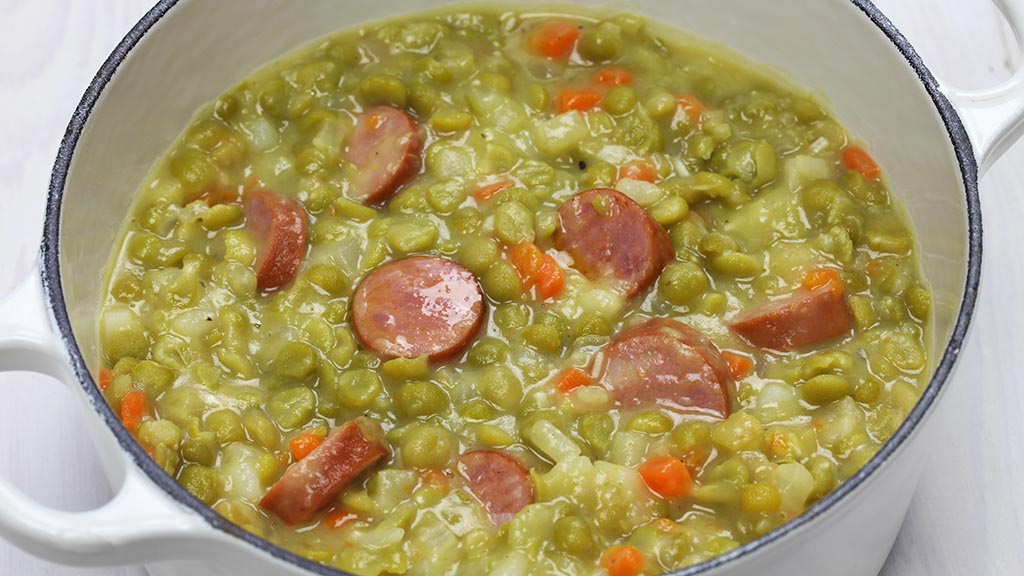 This Dutch pea soup, or snert, takes a while you make, but you won’t go hungry for the next couple of days. It’s incredibly filling but especially good when it’s a cold day and after some activities outside. I hope you enjoyed making this Dutch soup, named erwtensoep, and that you will be making this more often during those chilly autumn and winter days.

Share this Dutch pea soup with your friends or family members who you think will love this Dutch green pea soup recipe! 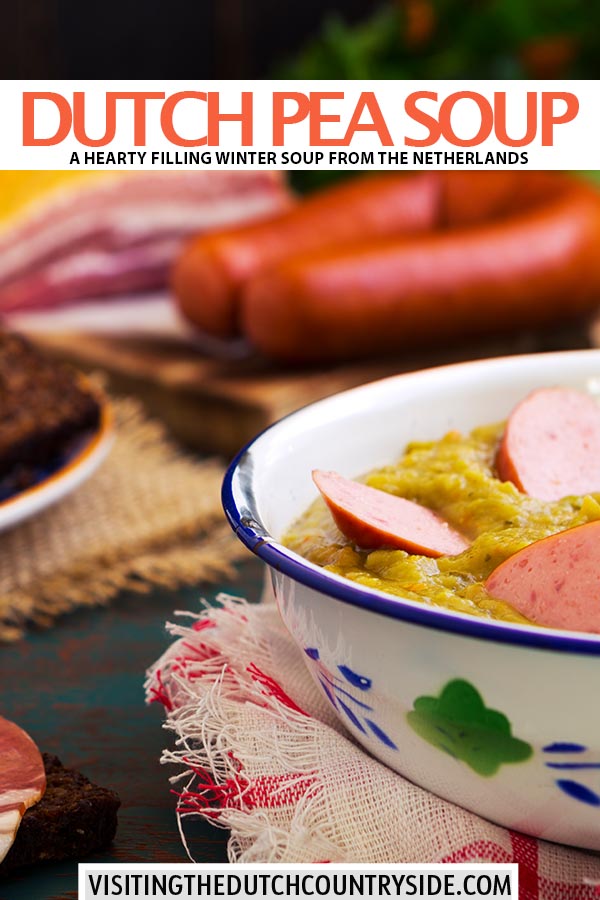