One thing that people usually like about The Netherlands is our traditional Dutch poffertjes. And, that’s why I’m giving your this poffertjes recipe. We have several sorts of pancakes in The Netherlands, and these round Dutch pancakes are one of them.

You might ask yourself, ‘What the hell are poffertjes?’. Well, poffertjes is the Dutch name for what small Dutch pancakes are called. This is the best poffertjes recipe to create the most delicious and fluffy poffertjes. I also have a good recipe for if you’re looking for a traditional Dutch pancakes recipe (the large ones).

To create this Dutch mini pancakes recipe, you need a special poffertjes pan (that you can find below the recipe!). A poffertje recipe always has buckwheat flour in it, as that gives you the traditional Dutch poffertjes taste.

Poffertjes are centuries old, and it is said that poffertjes originates from France. French monks developed them during the French Revolution. Napoleon seized almost all of the flour to feed his army, which led to a shortage of wafers for the church. And that’s when they started to experiment with a mixture of regular flour and buckwheat flour, which turned into these delicious pancakes. It came to The Netherlands via markets and fairs.

Interestingly, they were first named ‘broedertjes’ or little monks: named after the monks that created these small, fluffy pancakes. Only, when a copper plate was used to roast the pancakes (poffen in Dutch), that’s when the name was changed to poffertjes. And, that’s why these Dutch pancakes have this name for them.

If you’re looking for a vegan poffertjes recipe, I can recommend using plant-based milk, vegan butter for the end, and leaving out the egg.

If you want a poffertjes recipe without yeast, then I’d suggest you use a little less than two teaspoons of baking powder instead.

Good for around 4 servings (as a dessert, so if you want it for lunch you need to make more) – 1 hour and 15 minutes preparation – 20 minutes to cook

1. Sift the flour and the salt in a bowl.

2. Add the yeast, egg (optional sugar) and half of the room temperature milk.

3. Mix or whisk these poffertjes ingredients until it’s smooth.

4. Add the remaining milk while stirring (the mixture should be as thick as buttermilk). If it’s a bit too thick, you can add a little extra room temperature milk.

5. Cover the bowl with a moist towel and let the mixture rise for around 1 hour (don’t stir it after it has risen).

6. Put the mixture in a flask or drinking bottle to make it easier to pour it into the small poffertjes holes.

7. Heat the poffertjes pan and make sure to grease the holes with the melted butter.

8. Fill the holes for the poffertjes, when the poffertjes pan is hot, with a flask or drinking bottle for about three quarters. The poffertjes are going to rise because of the yeast and will get their fluffiness from that. If you fill the holes up wholly, the batter will spill, which is a waste for these delicious things.

9. Bake the poffertjes golden brown on one side.

10. Turn them around with a fork or wooden skewer, when it’s still a little bit wet on top of your poffertjes. And then bake the poffertjes golden brown on the other side.

11. Take them out of the poffertjes pan and add them to your plate: add powdered sugar on top and/or a small cube of butter (I prefer them with only powdered sugar).

12. Add a little bit of melted butter again in the holes and continue to fill them until the poffertjes mix recipe is finished.

Extra tips: If you’re just starting with making Dutch poffertjes, I can recommend you start with half of the holes filled with batter. The reason? The poffertjes generally bake pretty fast, and you need to turn them exactly when they’re golden: don’t bake them too long as that will make them dry and too dark (which is not what you want). They are generally finished within a few minutes.

Do you want to keep your freshly made Dutch poffertjes, from this traditional Dutch poffertjes recipe, nice and warm, while you bake a bunch? Then place a pan with water on high heat and when it boils turn it to either low heat or turn it off. After that, you put a plate above the warm water and add your poffertjes here.

If you’re looking for a poffertjes recipe without a pan, then you can fill an empty ketchup bottle with the batter of the little Dutch pancake recipe (you’d probably want to add a bit of flour to the recipe, as it needs to become a little bit thicker, or around 30 ml less milk). Place the lid on the bottle, and make tufts of approximately 3 centimetres wide in a hot frying pan. Then bake them golden again, and voila. However, I highly recommend you make this Dutch pancakes poffertjes recipe with a Dutch pancake pan because that’s the only way they can get perfect and in the best shape you want them to be. 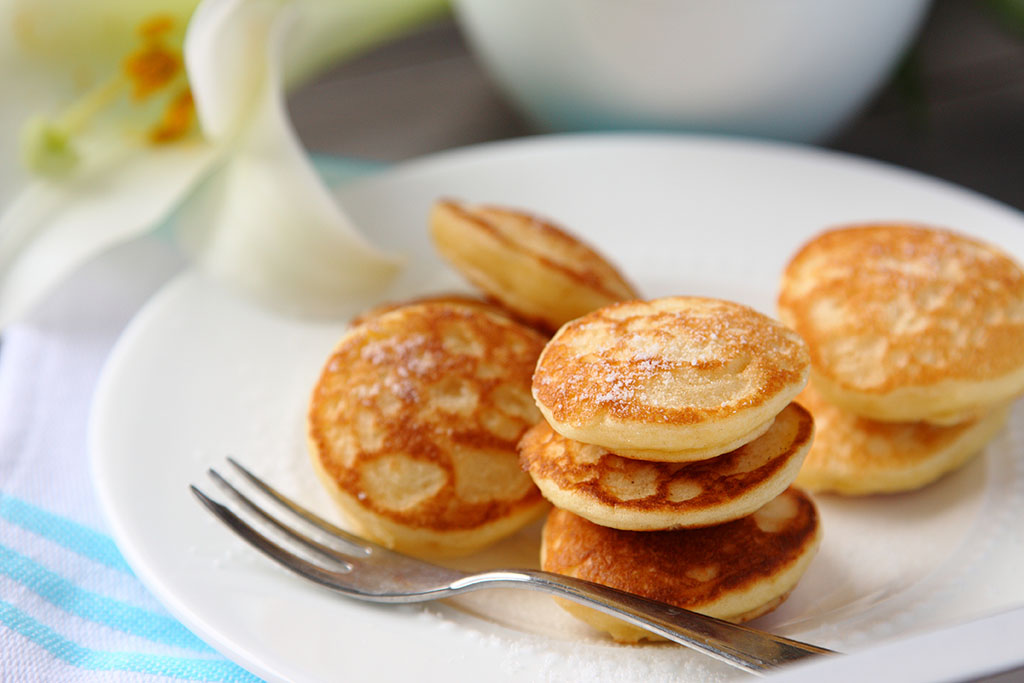 I hope you have enjoyed this mini Dutch pancake recipe so that you can have a tasty little bit of The Netherlands right in your home. Poffertjes are one of those things you usually ate as a child, but it’s also one of those typical Dutch foods that every Dutch person still wants to eat when they’re an adult: because you’re never too old to create this poffertjes recipe, which is very easy by the way. I hope that you’ll create this poffertjes recipe endless of times again because you love the taste, in your Dutch pancakes pan, of course.

Share this Dutch little pancake recipe blog with your friends, or family members, who you think will love this poffertjes recipe! 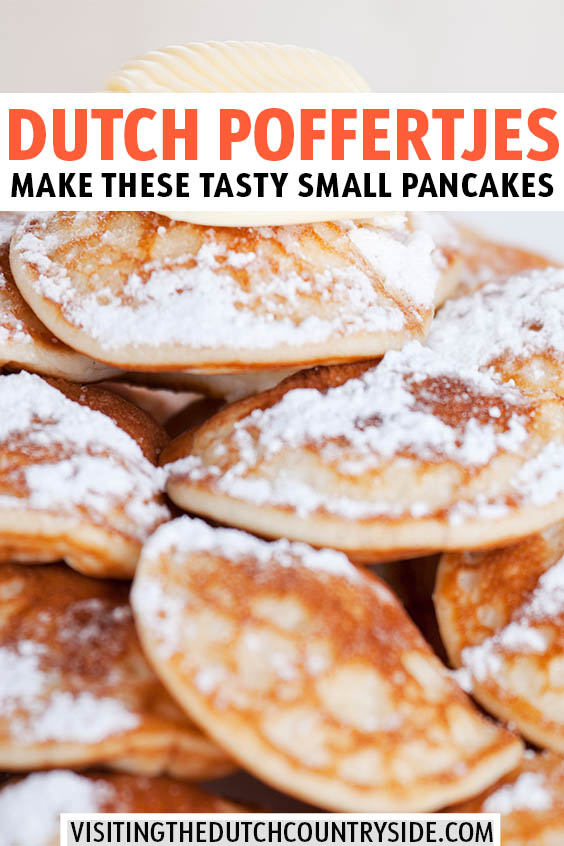