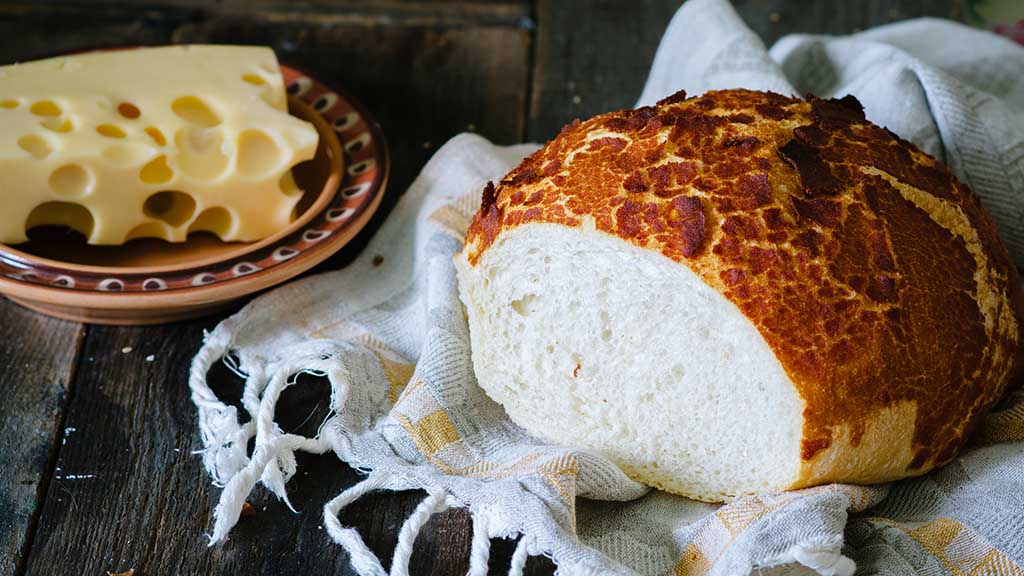 Dutch people and bread is a perfect combination. We love our everyday Dutch bread, which is fluffy, not sweet and very tasty. One of the loaves of bread you need to make is Dutch tiger bread. This recipe for tiger bread is the best to make this delicious homemade tiger bread.

We have some sweet Dutch bread types, such as this Frisian sugar bread or slices of bread eaten as dinner or dessert, such as a Jack in the bag. But, overall, our bread is not sugary or sweet. This tijgerbrood recipe shows you everything you needs to know: from tiger bread ingredients and toppings to the history of this Dutch crunch.

I hope you will enjoy this tiger bread recipe and will make this bread recipe many more times. One of my favourite things about tiger bread is the crust. The tiger bread flavour is standard for bread from The Netherlands, but pieces of bread are definitely not the same worldwide, so I suspect that you will be (positively) surprised by this Dutch tiger bread. I will be showing you how to make tiger bread now.

Tijgerbrood is a type of Dutch bread, named after the crust it has on top. It literally translates to ‘tigerbread’ but is known in the U.S.A as Dutch crunch bread and giraffe bread in the U.K. It was named tiger bread because the crust was said to be similar to the pattern of a tiger, but it’s more a leopard. There are white, brown and wholegrain versions of Dutch crunch bread. So, the Dutch crunch bread origin is The Netherlands.

When the bread dough has risen, for the most part, a little layer is added that is most commonly made of either rice flour or a combination of both rice flour and breadcrumbs. We use rice flour and make a rice paste for tiger bread because this doesn’t stretch with the dough when it’s rising, which is how you get the crust.

I will also be using the other names of tiger bread, such as giraffe bread and Dutch crunch bread, throughout this article simply so that people from different countries can also easily find this delicious Dutch crunch recipe.

I hope you will enjoy this recipe for tiger bread and that you will learn how to make Dutch crunch bread (also named giraffe bread).

1. This tiger bread recipe is famous for a coating on top of the bread. This is made by adding a little layer on top of the dough, which creates the crunchy part. You need to make this layer before you start with creating the bread. Mix the breadcrumbs, rice flour, salt and sugar in a little bowl and combine this with a whisk. Then you add the boiling water and stir it until every part of the dry ingredients is moist.

2. Leave this mixture to cool down until it is down to 25 degrees Celsius. Then you will add the instant yeast and will stir it. You must then cover the bowl and leave this mixture to rise in a draught-free place until you use it. It needs to rest between 1 and 1,5 hours before you want to use it on top of your bread.

3. Now we’re getting at the bread-making phase. Add the wheat flour, milk powder and salt in a bowl: stir this around with a whisk until it’s evenly combined.

4. Then, you will add the instant yeast and stir the dry ingredients repeatedly until it is combined.

5. Add the room temperature water and knead for around 12 minutes with a Kitchenaid machine or by hand until you can pull a thin film from the dough. The temperature of the dough should be approximately 25 degrees Celsius.

6. Leave the dough resting in a closed and lightly greased bowl at 27 degrees Celsius until the dough has doubled (it should take around 1 hour).

7. Take the dough out of the dough and press it with a flat hand into a rectangular piece of dough.

8. Fold the left halve to the middle and fold the right halve a bit over the middle.

9. Press out the air of the dough.

10. Roll the dough: not too loose, but not too tight either. Roll out the dough until it reaches your preferred width of bread.

11. Grease a baking mould and lay the dough (with the seam down) in the mould.

12. Make the layer that you will spread over the top of your dough spreadable by adding the sunflower oil. If the mixture isn’t spreadable, you can add a little bit of extra water or oil.

13. Cover the bread with the spreadable mixture with your fingers’ help until it just about covers the dough. If you add too little of the mix, you won’t get any results after baking the bread, and if you add too much, the crunchy parts will fall off the bread.

14. Let the bread rise for another 50 minutes in a humid, draught-free space at 29 degrees Celsius.

16. Put water in the metal tray of the oven to create steam. As soon as you’ve placed the water in there, you immediately put the bread in the oven.

18. Take the bread out of the baking mould immediately after it is done baking and leave it cool at a grid. Only cut the bread when it is completely done with cooling down.

You can also create your own little rising place for your rise of the dough: Just take an electric blanket and place a storage box on top of the blanket. Place two glasses with boiling water under the storage box and place your bread here (check the temperature before adding the dough in).

If you cannot find any milk powder for this recipe for tiger bread, you can replace the weight of water and milk powder with whole fat milk. It is possible that you need a bit more or less milk in the dough as it depends on the kind of flour you’re using. For reference: the dough needs to feel like the sticky part of a post it.

If you want to make the tiger bread recipe with a topping with no rice flour, you can try breadcrumbs. However, I have never tried to only use breadcrumbs, but some people say it also works. So, in that case, you can use lukewarm water with dissolved yeast. Then you add the breadcrumbs to that some sugar and oil, and that’s it. Let me know if it works in the way you wanted it to do if you try this.

This giraffe bread recipe is only for one bread, so if you try the tiger bread topping recipe (but with breadcrumbs) and it fails, then it’s not a big deal. The crunchy part of the bread doesn’t have that much extra flavour, but it does make this Dutch bread recipe even better.

There is no extremely easy tiger bread recipe as the best way to make it and get the perfect giraffe bread. But, this Dutch crunch recipe is worth trying out. Not only because it makes your home smell like a bakery, but also because this Dutch bread recipe is so tasty. The more often you make this tiger bread, the easier it is to recreate this tiger loaf recipe. Because you know what they say: practice makes perfect.

I was also surprised to hear that a common question is: ‘What goes well with tiger bread?’. Now, the reason why I am surprised to hear that is simply because it’s bread: put whatever you want on it. We love to put a layer of butter and speculaas on top of it, fresh strawberries, Dutch chocolate sprinkles (not the ones for cake decoration, special sprinkles for bread), and peanut butter, jam, etc. So, there’s no need to ask me: ‘What to eat with tiger bread?’, because as long as you like it, that’s what matters. 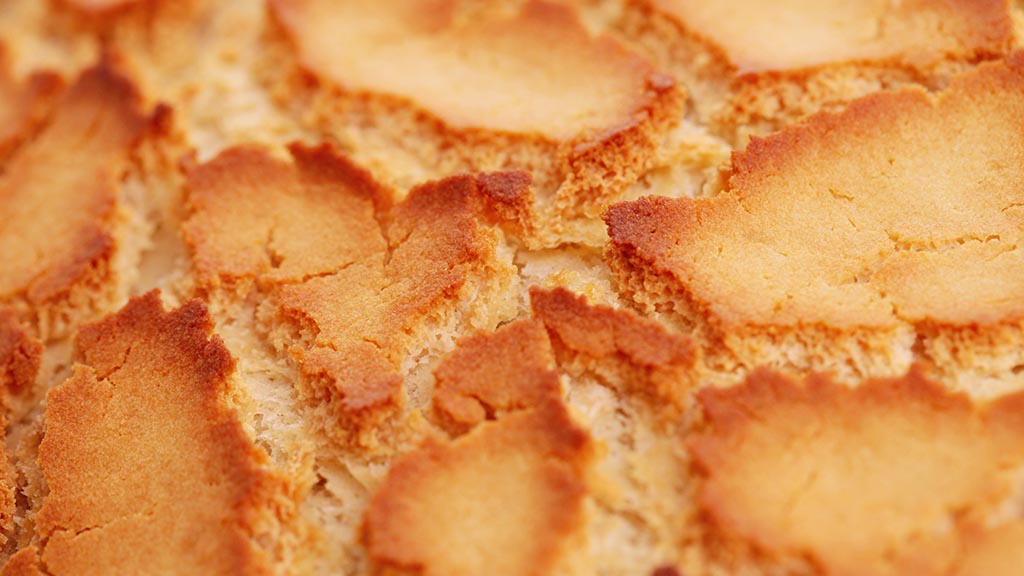 Share this recipe for tiger bread with your friends or family members who you think will love this giraffe bread recipe! 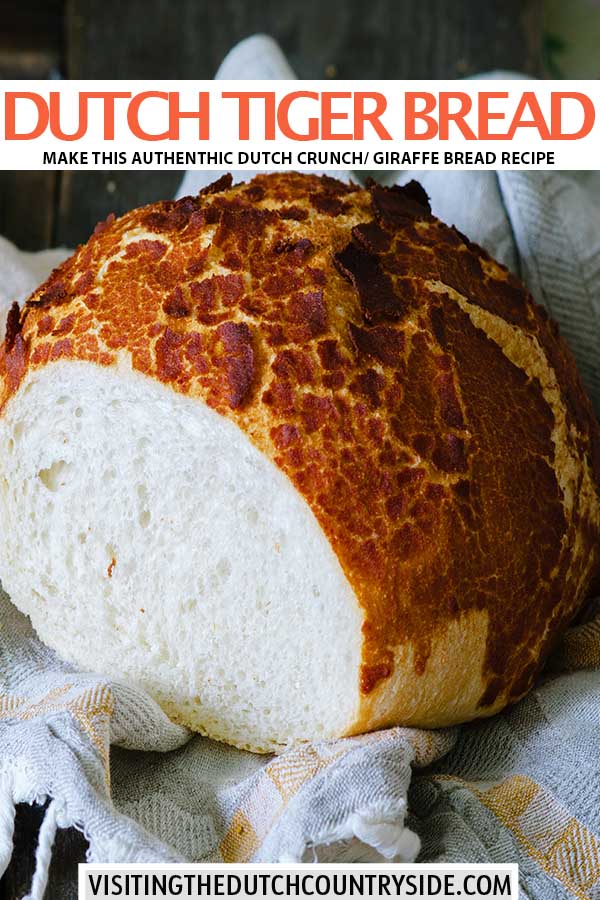 This recipe is not my own but comes from Mannin from Baksels.net. This is the most perfect giraffe bread recipe for this Dutch bread, in my opinion. If you’re living in The Netherlands, you can participate in their baking workshops and reserve a spot at their website.