Amsterdam is a beautiful city of The Netherlands and famous for quite some things, including for being the Venice of the North. But there are more facts about Amsterdam that you should know about. So here you will find 49 interesting Amsterdam facts.

Most interesting and fun facts about Amsterdam, The Netherlands

2. Amsterdam is a city which is built on poles. A lot of poles. One of the most interesting facts about Amsterdam, The Netherlands, is that it is built on eleven million poles. The city is a placed a meter or so below sea-level. The train station of Amsterdam Centraal alone needs 9000 poles to be supported whereas a normal house needs only 10. These wooden poles of 15-20 meters are placed in a sandy layer which is around 11 meters deep.

3. Amsterdam has officially only been the capital of The Netherlands since 1983. Before that everyone saw Amsterdam as the capital, but it wasn’t officially stated in the constitution for quite some time. Some of you rightfully wondered why? So here’s a short explanation.

During the the times when the area was a Republic, we didn’t have a capital, but Amsterdam was still the most prominent city in the country. This all changed when the first King of Holland arrived: King Louis Napoleon. The Frenchman yes. He decided to put the capital in Amsterdam, and two years later he moved here (but mainly resided in other places in the country). In 1810, the country was then -to be simple said- added to the empire of French emperor Napoleon who declared Amsterdam to be the third capital of his empire.

But, after that empire fell, the of Orange Royal Family returned to The Netherlands in 1813 and Amsterdam remained the capital until 1815. But then, The Netherlands and Belgium become a country under King Willem I due to a decision made by the congress of Vienna. For this union a new constitution was needed, and to make sure the union didn’t immediately burst into flames due to the differences between the people – and their pride, there wasn’t an official capital.

Even when Belgium separated from The Netherlands (we still miss you guys) in the 1830s, this stayed the same way. But, like I previously said: everyone simply agreed that Amsterdam was the capital. But, it took until 1983 for it to be placed in the constitution again.

4. If you pass away in Amsterdam but don’t have any family, friends or acquaintances, then a poet will write a poem and recite it on your funeral.

5. De Torensluis bridge from 1648 is the oldest and widest bridge of Amsterdam.

6. The Red-Light District is well known for its red lights, however, there are also blue lights. When the lights are blue you know that there is a transgender woman in the room.

7. The floating flower market exists since 1862 and has grown into one of the most famous flower markets of The Netherlands. The stalls are all located on boats which is a remnant from the time that the flowers were delivered by boat.

8. in 1806 Lodewijk Napoleon stated that Amsterdam was the capital of Holland. As he was the King of Holland he tried to learn some Dutch, which didn’t go that well. He tried saying ‘I am the King of Holland.’ But he ended up saying ‘Iek bien konijn van Olland.’ Which means I’m the rabbit from Holland.

9. The biggest football club in Amsterdam, Ajax, has one of the most successful youth education programs in football in the world. Think of Wesley Sneijder, Dennis Bergkamp, Patrick Kluivert, Clarence Seedorf and many more.

10. There is a cat boat in Amsterdam. So, if you’re looking for quirky things to do in Amsterdam, and like cats, visit the Poezenboot. It’s an animal shelter where they have more than fifty cats. 11. The motto under the sign of Amsterdam (three crosses) says heroic, determined and merciful.

16. Amsterdam has around 1515 bars and cafes at the moment of writing.

18. There are 1281 bridges in Amsterdam, 80 can be found within the canal ring. The most famous bridge is the Magere Brug or Skinny Bridge. When you’re standing on the corner of the Reguliersgracht and Herengracht you can see 15 bridges at the same time. You do have to stand on the side of the non-even numbers and count the bridge where you’re standing on as well.

19. Amsterdam has more canals than Venice and more bridges than Paris. 21. Amsterdam gets visited by around 14 million tourists each year. Around 4.5 million of those are Dutch tourists and more than 9.5 million are foreign visitors. And that in a city that has only around 821.000 inhabitants.

22. The city of Amsterdam is located on 90 small islands.

23. The three most important canals are the Herengracht, Prinsengracht, and Keizersgracht. These were created in the 17th century during the Dutch Golden Age. You will find more than 1550 monumental buildings alongside these canals.

24. You can find more than 400 kilometres of cycle paths in Amsterdam alone.

RELATED ARTICLE  These Are The Best Dutch Beaches Near Amsterdam You Must Visit When It's Getting Hot In Here!

25. Most canal houses are very small at the entrance, the reason for this is that they only had to pay taxes for the size of the facade of the house. That’s why everyone built high and long houses. You can find the smallest facade in the world at Het Singel 7. It is only 1 meter wide and barely wider than the front door. As the house goes back it rapidly increases in width.

26. Amsterdam has more than 7000 monumental buildings.

27. Amsterdam has a great public transportation network and more than 747.000 people use it every single day.

28. You can find 22 paintings of the Dutch painter Rembrandt in Amsterdam.

30. There are 8 windmills still left in Amsterdam. 31. You can find 38 markets in Amsterdam. From flower markets to antique markets.

33. 63% of the Amsterdammers use their bikes daily.

34. The oldest house can be found at the Begijnhof. The house has a wooden façade that dates back to 1475.

35. Amsterdam has the highest centration of museums per square meter of all cities in the world.

36. Amsterdam Airport Schiphol is the only airport in the world that has a museum. You can find him behind passport control and the entry is free.

37. There are more than 300 coffee shops in Amsterdam. In coffee shops, you can buy up to 5 grams of soft drugs. Soft drugs are not legal in The Netherlands but tolerated. If you buy weed from a street dealer it’s illegal as you are only allowed to buy soft drugs at coffee shops. All hard drugs are illegal.

38. The smallest house of Europe can be found at Oude Hoogstraat 22 and is only 2, 02 meters wide, but six meters long.

39. The main shopping street of Amsterdam, the Kalverstraat, exists for more than 600 years. Until 1629 there was a market to sell cows, calves and oxes which refers to the name. Kalveren means calves, so it’s literally the calves street.

40. The nickname of Amsterdam is Mokum. It comes from the Hebrew word of makan, which means city. 41. The Munttoren (munt tower) is a remnant of the medieval city wall. It gets its name from the fact that coins were minted there in the 17th century and munt means coin.

42. Amsterdam has the most carillons in the world. You can find eight of them in Amsterdam and most of them date back to the Golden Age.

43. The widest house of Amsterdam can be found at Kloveniersburgwal 29. It is 22 meters wide and was built in 1660 by the wealthy brothers Trip, the house is also named the Trippenhuis.

44. The monument on Dam square was renovated by the Germans after the war.

45. Cuttings of the Anne Frank tree in Amsterdam have been sent to several cities all across the world such as Den Haag (The Hague) and New York.

47. The Kalverstraat is the most visited shopping street in The Netherlands.

48. Tram number 5 is the busiest tram line of Amsterdam.

49. You can find swarms of parakeets in the Vondelpark. More than 4000 parakeets can be found here. They are not native to The Netherlands but were brought here as pets. A few escaped and decided that they liked Amsterdam. 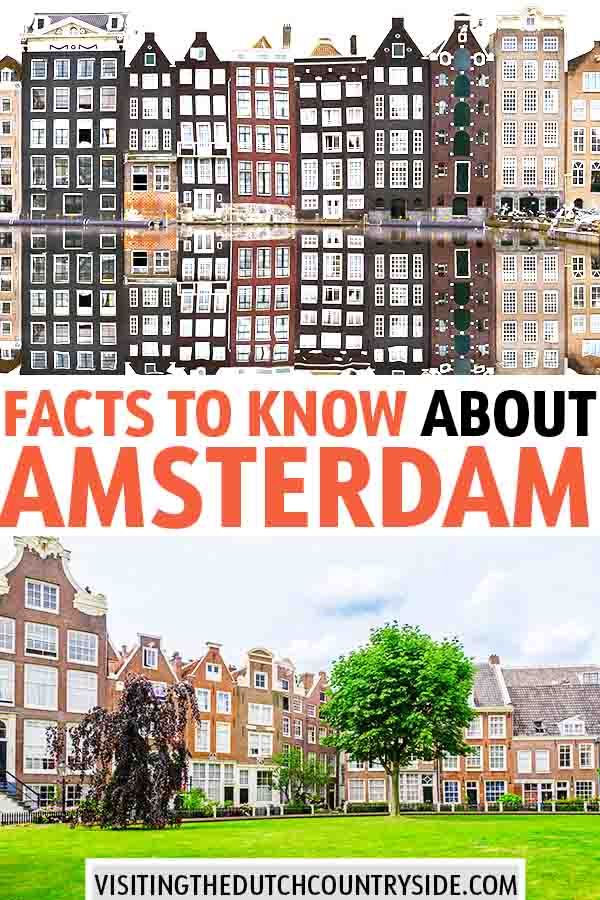 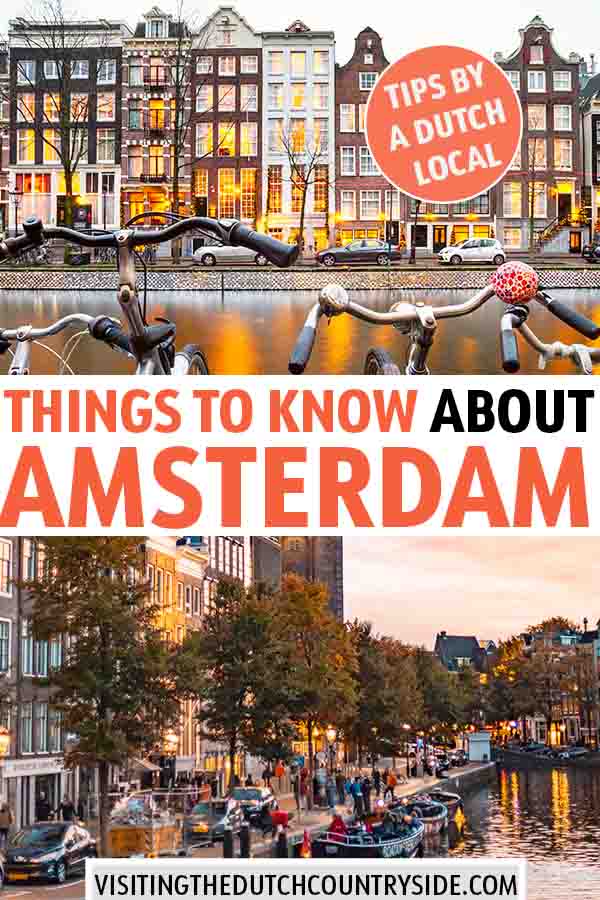 Discover and celebrate King’s Day in Amsterdam & The Netherlands

The best and cheapest hostels in Amsterdam

Dutch Christmas markets you have to visit

What to do in Amsterdam when it rains

10 things you actually need to pack for Amsterdam in winter

Dutch beaches you have to visit near Amsterdam

Did you know any of these facts about Amsterdam, The Netherlands, already? If so, let me know below which ones. I hope you will enjoy your trip to Amsterdam and the rest of The Netherlands. Share this post!!

If you’re interested in receiving even more travel tips about my beautiful country (which I know you are), subscribe to my email, and I will send you tips about The Netherlands that won’t see the light on this website.

As a born and raised Dutch local, I know my country better than most people. And because of this, you will travel through The Netherlands beyond the crowds 2.0.

And the best part? 5 secret places you have to visit in Rotterdam will be sent your way immediately! For free! There’s nothing you have to do for receiving free tips and guides about The Netherlands. Except for writing down your email. It’s just a little extra from myself because I’m such a kind human (if I may say so myself). You’re welcome, and I will see you on the other side!

P.S. I won’t be spamming you. I hate those email’s as much as you do. You will receive a monthly email with the latest tips of The Netherlands.